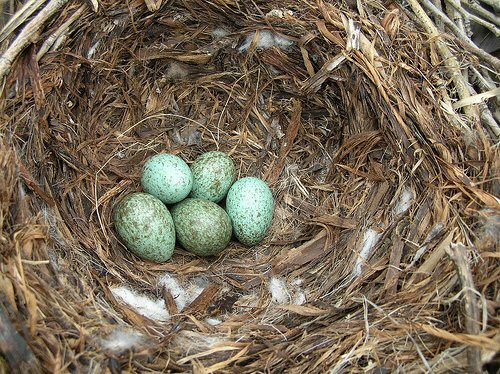 Crows Nest Image from B & B Wildlife

I was sitting in the hallway outside three classrooms overflowing with first graders. It was moments after morning exercise when it seems that the kids are most awake, engaged, and happy. Something about bopping along to ‘Dynamite‘ together makes their brains release copious amounts of endorphins and everyone is beaming smiles, ready to start the day.

I sat slicing black craft felt into squares and tacky gluing them to the backside of white tiles in preparation for the first grade Father’s Day project. It was mindless work and so my ears tuned into the classroom on my right as the teacher began to read a story to her class.

The story is simple. A mother Crow sits on her crow eggs. She sat and sat and sat on her eggs. Time passes and she grows bored of sitting and waiting. One day as she watches other crows soaring through the sky she decides she has had enough of waiting and missing out and decides that the eggs will never hatch. She flies away.

Up above Crow’s nest was Hawk. Hawk watches Crow fly away, abandoning her nest. Hawk decides to move in as mother to the eggs and low and behold the chicks hatch under her care. But then – Crow returns and wants her babies back. Hawk refuses saying that she is their mother and off they go to see Eagle, the only bird who can decide who is the best mother for these crow chicks.

My pulse quickened. I started to worry. The best mother? A mother leaving and returning is a narrative so many children live through. More significantly in my world, this story is too close to home for any child in the foster/adoptive world. In the world I inhabit, sometimes mothers need to leave and then come back, reuniting with their children. What child sat quietly in that classroom with their heartbeat gushing in their ears because this was a story too close to their own? But it was not my child’s classroom. I did not know who was in that class. Did the teacher?

At the end of the story the teacher took a quick vote to ascertain what the children thought. Who was the best mother for these chicks? Who was the right mother to look after them? She asked these questions easily, quickly, as if this question, this predicament, could not, would not be the actual real life story of a child sitting right there at her feet. Right mother, best mother, those are loaded words. Those who had an opinion voiced theirs immediately, almost unanimously the classroom spoke – the hawk of course. She was patient. She knew to stay. She didn’t leave. She could stand the waiting and waiting. She was the better mother.

I was sweating a little. If a child in foster care was a student in that room and hidden in their heart was a mere glimmer of hope for reuniting with their birthparent – if there was an adoptee present – would they feel supported enough to speak?

Then I heard his voice.

Just because she left doesn’t mean she doesn’t love her babies.

My heart caught in my throat. There he is. His story alive in those pages – because who else would defend and stand up for the mother who couldn’t, wouldn’t stay? Who else knows the pain of a mother who must leave but still loves.

She came back. That counts. She loves them. He said in a whispery voice.

Tears came to my eyes and I put down my scissors. The teacher said his name and asked him to qualify the evidence from the story – schema she demanded. Did she not know I wondered?

And then just like that she broke them into groups to talk about evidence. Support your idea from the text! She commanded.

She came back. She wanted another chance I imagined him pleading with his classmates. In my mind’s ear I could hear disagreeing. She doesn’t love them, they would say. Schema! And then his internal doubts, fears, and plaguing pain fueled into fire by their words.

This choosing is alienating. Choosing mothers without understanding the complexities of a child’s real life context is horrifying. I support teachers, my kids’ teachers do an amazing job each year engaging my children. But this classroom is my evidence. This is why I talk to my children’s teachers at the beginning of the year about our family. Without an adoption or foster care advocate at the beginning of the year aiding the teacher in understanding potential pitfalls and creating mindfulness for their particular story this kind of pain is inevitable.

Can I protect my children from this situation happening all the time. No. I am not fooling myself. The teacher was reading an age old Native American tale about Crow and Hawk. There is nothing wrong with that. Would she have made a different choice if she knew a child in her class was walking through this very story in their everyday life? I certainly hope so.

I write this not to shame the teacher, but to encourage you to have a conversation with your teacher, principal, and/or librarian. While we cannot protect our babes from everything, not educating those that care for our children is inexcusable. Yes, summer is coming. Make a plan now to talk with your children’s teachers the first week school starts. Do it in honor of this little boy and the pain that could have easily been avoided. Advocating for our children and creating understanding in the environments they inhabit is part of parenting in the adoptive world – because while we advocate for our own child we might also prevent a little boy’s pain.