When Hair is Threatening 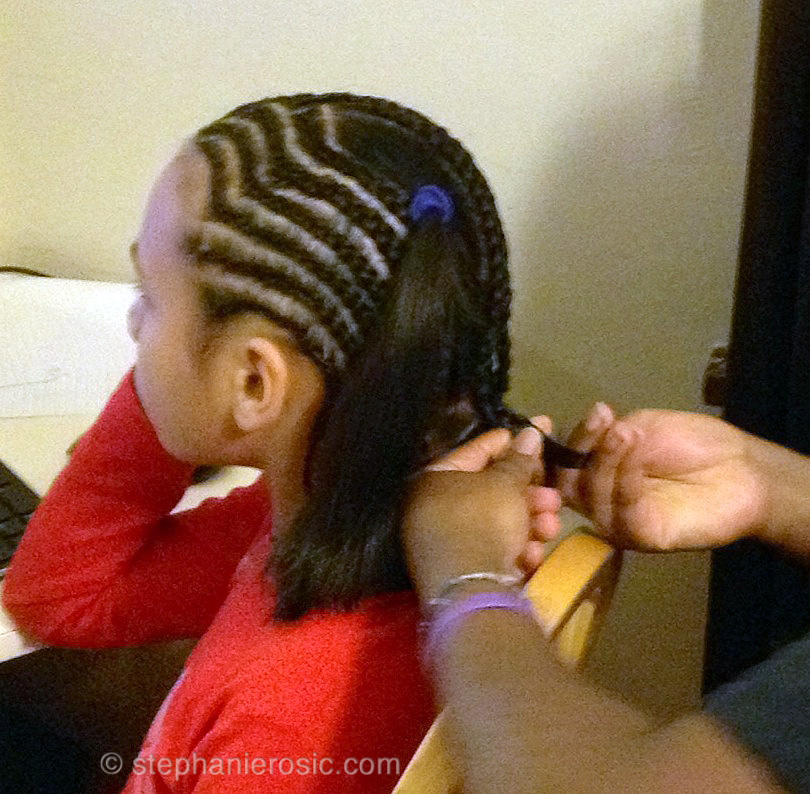 My oldest having her hair braided

Back in September my oldest daughter and I were listening to the news in the car when we heard about Tiana Parker. A seven-year-old excluded from school for lacking ‘presentable’ hair. We learned that little Ms. Parker’s ‘unpresentable hair’ was dreads and my daughter became enraged.

“Mom! That is totally unfair! Who would think that? Why would they do that to her? What are they afraid of?”

The question – one that my ten-year-old was savvy enough to ask – centered around fear. What ensued in the car was another conversation about race, and how that influences perception. Understanding and valuing only one set of cultural values will lead to dismissing and voiding another’s. Dreads as part of black culture, my daughter gets, its part of her cultural history. To hear that a school would not value her cultural identity left her unsettled. Over the next few days we talked more about Tiana and when she ultimately left her school and enrolled in another school my daughter was pleased.

Fast forward a bit and for the first time in a long while, my daughter had her hair braided. She was thrilled and proud when I sent her to school the next morning. When I picked her up at the end of the day she looked tired.

“Mom, all anyone wanted to do was touch my hair. I was petted and poked at all day.”

Let me say that she attends a diverse school. And while this had happened at her old mostly white school when her hair was braided, I had not anticipated this same experience. Mostly it was classmates and friends who had never been up close and personal with cornrows and so felt the need to touch – repeatedly. It left me speechless – what is it about black hair that leads to the violation of personal space? And what is it about black hair that defines for others what is presentable and what is not?

In a recent issue of Essence this exact debate was featured in “The Great Hair Dilemma.” This polarizing conversation not only occurs between white and black cultures, but also inside the black community. Debated in this fascinating interview is why today we still pass judgment based on hair alone. The two women interviewees debated whether someone is accepted, commended, or promoted based on how they wear their hair in a mostly white work environment. But the Tiana Parker situation proves that it is not only happening in the corporate world, it is happening in our schools.

Much of what occurred with my daughter was curiosity – that is part of the learning process. Kids are kids and will investigate new things, even when it’s on their friend’s head. But, what happens when it goes too far and becomes ‘othering’? When children of color, and adults in the workplace began to feel like outsiders just for being who they are culturally?

Oh, and did you see this cultural experiment? It’s Endia Beal’s “Can I touch it?” project featuring middle-aged white women in a corporate context who received black hairstyles. It serves to bridge the experience gap between white and black culture via a stumbling block for so, so many – hair.