The Practice of Thanksgiving 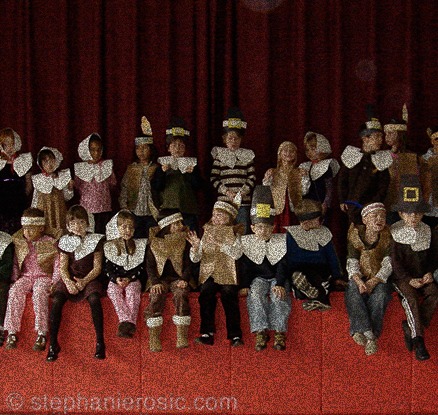 Thanksgiving is rapidly approaching and the kids are excited to get together with family and celebrate. They are coming up with wacky turkey craft ideas and begging to make pie. But I want to be honest with you. Celebrating Thanksgiving in the most American sense is difficult for me. To cling to the idea of the Pilgrims and members of the Wampanoag tribe happily noshing on wild turkey legs as is too often featured on greeting cards and kids coloring pages leaves a falseness to the day. To remember the day as it was perhaps, as a strained and tense partnership between invaders and residents is a more honest rendering in my book.  So it was with mild horror that I watched this picture unfold at my oldest’s Thanksgiving kindergarten event years ago (yes, I think of it each Thanksgiving). Each student trotted out as either Indian or Pilgrim to sing a happy song about turkeys gobbling and being grateful for friends. As a parent, I realized I had a long way to come back from that stunted misrepresented understanding of Thanksgiving. {Yes, I know they are kindergartners, but still. Not funny.} 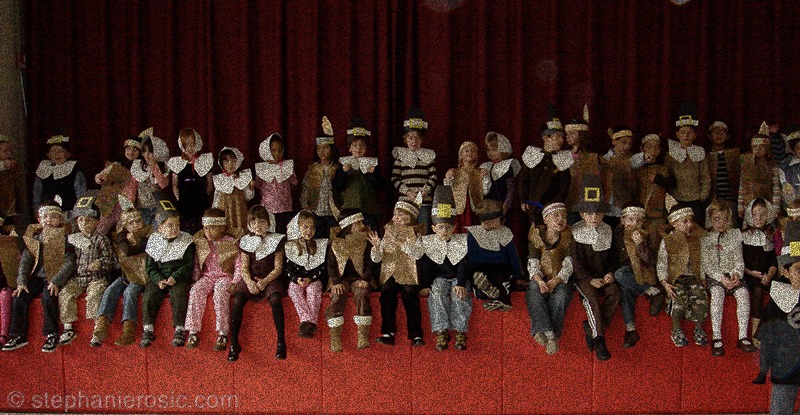 We don’t sugarcoat true events around here. So again this year, I will explain to my children that our modern day Thanksgiving stems, yes, from the 1621 harvest celebration in Plymouth between the colonists and local Native Americans. We will review accurate Pilgrim history about how their numbers suffered greatly because of scurvy, poor shelter, and disease, and when it came time to give thanks and honor to God, there were only 53 of the original 102 passengers left. Over the course of that first winter the colonists had their first interactions with the local tribe that stirred them to the formation of a military. Yes, a military was their first response. These Native Americans had already faced kidnapping, slavery, and unprovoked violence from this same people group (never mind the massive cultural genocide that was occurring). But still, in March, the Pilgrims and local chief would make a treaty of peace. And that fall they celebrated with  a three day harvest feast and gave thanks. Together they gave thanks – but let’s be careful about the happy-skippy Thanksgiving picture we create in our heads.

I’m not saying that we cannot have a time of Thanksgiving – but perhaps we should pause and consider how we are thankful. The takeaway from this first harvest feast for me has been to cast a critical eye on the practice of thanksgiving. I think we take it too lightly, being thankful for the superficial – our iPhone, our BMW, our Hawaiian vacation, concert tickets, favorite toy, TV {you fill in the rest}. Let us look more carefully at the setting of the first ‘Thanksgiving’ and imagine for a moment their gratefulness. Because for both colonists and Native Americans alike, their thankfulness was borne from great sorrow. Each individual present that day had over that past year faced disease, hunger, a Nor’easter winter, and the dire potential for harm from the ones who sat at table with them. This was no trite passing ‘let me think of something, wait, give me a minute’ thanksgiving session. Their gratefulness came at a gut level and with a heavy price.

So this Thanksgiving my family will cast an eye backwards over the past year, looking carefully at the difficulty, stress, tears, and hard things we have faced in life. I’m not looking for weeping at the Thanksgiving table this year, but a deeper, more satisfying act of thanksgiving than we have had before. I want to deepen the culture of thanksgiving, giving honesty to what we have faced and overcome; even if its sorrow filled. I want our gratefulness to be soul borne in a way that brings our story to life in raw fullness. For our family this year there has been many a hardship, and for that I just may be thankful.