Want to be a Feminist? Play the Trombone 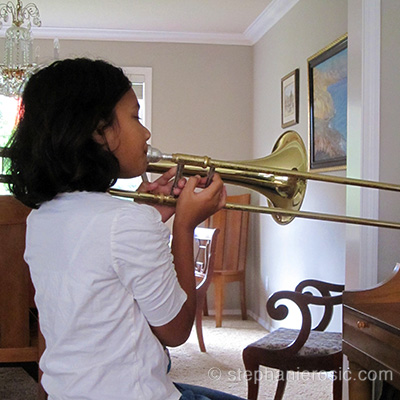 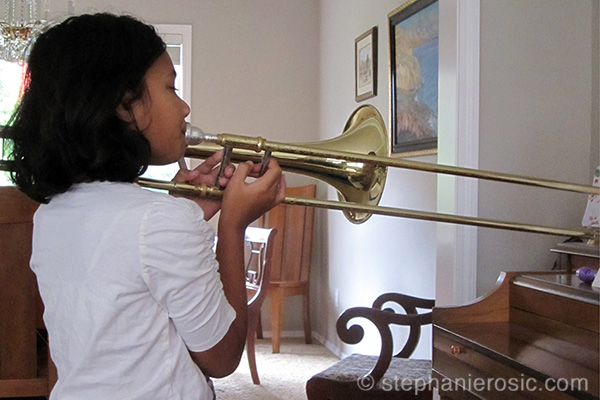 She half ran half skipped through the pouring rain carrying what appeared to be a body bag. When she burst through the front door she shimmied from her backpack, kicked her shoes off without hands and shrugged her coat from her body arm by arm before sprinting the last few steps into the living room to methodically lay the body bag lovingly on the carpeted floor.

That’s when I saw it was no body bag – it was an enormous instrument case, as large as her, implied by the half lilt of her body as she carried the weight and length of the black oblong box. Her sister and brother, sensing Christmas was in fact coming early loped squealing over and assumed a kneeling position in front of the case mimicking their sister’s large expectant smile.

Pop. Pop. Pop. You remember that scene from Indiana Jones when they open the Ark of the Covenant? That’s what it felt like in my living room. Each of them not sure what to expect and then overwhelmed with the burgundy plush velvet on the inside, gasps escaped their lips and they collectively sucked in air and held it. I watched as her hands reached in and lifted out a gleaming, seemingly sparkling – Trombone.

Was there anything greater than this thing that had entered our home? Certainly not. She turned it over and over in her hands, lifting it to see each element and finally stuffing her hand inside the horn. This careful examination was being done despite the pleading sounds emanating from her brother and sister to “Please, please let me touch it! Hold it! Could I even play it?”

After a long while she finally put the instrument to her lips and blew. What came from the horn that day was equal to what I can only assume are the death sounds of a Woolly Mammoth. But when she pulled it away she beamed and said, “I have decided to play the trombone!”

Little did I know what had occurred in the music room earlier that day and what would continue to happen over the course of the next few weeks. She had suffered intense discouragement from – boys. When she declared her new fledging desire to not follow the rest of the girls to the flute or violin, the boys asked why. They asked her not to. They asked her wouldn’t she rather play a nicer instrument like the flute with her friends, and let the trombone playing be left to the boys. She took all this in stride, telling them they had a choice, they made it, and she had an equal choice which she also made – and if you didn’t hear the first time, it’s the trombone boys.

Then she went to the district training. I comforted myself in the knowledge that when you place ALL the trombone players in our district together, certainly there will be another girl, and they will high-five while their eyes commiserate that indeed they are new frontier explorers in the strange new land of trombone. That did not happen. She came home, walked through the kitchen and said, “I was the only girl. The ONLY girl in all the district Mom. No other girl is playing the trombone.” I was stunned into silence. Then she broke a smile and said a little louder, “No other girl!” Then WE high-fived and I assured her she was indeed a new frontier explorer into the strange new land of trombone and she was indeed awesome. She would lay a path for other girls to follow, as she bravely encountered resistance to her desire and ability to play the trombone (yes, maybe even better than the boys), but succeeding in Mary Had a Little Lamb all the same. This was feminism at its base – to have equal opportunity, rights, and access to the same instruments as boys, and to persist in that equality in the midst of discouragement; of those that would tell her “this isn’t an instrument for girls.”

Later that week I attended curriculum night for her 5th grade class and relayed to her (totally awesome) teacher that she was alone in the district playing the trombone as a girl. She promised encouragement and that’s when I heard the dad who came late and had been sitting in the back. Hearing me say, “Yes, she’s paving the way for more girls to play the trombone without fear!”

He simply said, “Yes, she’s doing it for women.”