Why I Taught My Girls To Say IF

I wrote this post back in May after hearing my girls playing, but did not publish it because I wondered if other parents would connect. In light of the Time article “The Childfree Life” back in August and the many fruitful discussions that have come from that piece I decided to publish this piece today. Please leave a comment and let me know what you think. 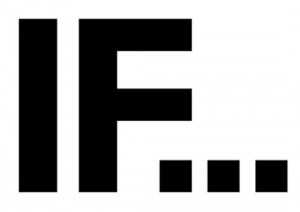 It starts early. Usually with dolls, or Barbies, or stuffed animals. One second your sweet three year old is cuddling with a sacred too-loved stuffed animal, and then a moment later that one-eyed armless bear is dating that loose-billed orange tail-feather-less duck and the next minute they’re married.  Married. We all know and understand the social development part of this kind of play, the mimicking of the world around our babes. But then quickly those stuffed animals are having babies {goodness me} and soon that pink rabbit family has twelve dependent baby bunnies to feed with only one dirty peeling plasticky carrot. Ahem. That last part I may have editorialized.

I was fine with all that ‘social play’ until one day I heard my daughter say to her friend, “When I get married…” It was the when that made me pause and consider. Later into the conversation she then said, “When I have kids…” And that right there was too many whens for this mama.

So I called into order one of my “family talks”. I saw their trepidation when they entered the playroom because usually these ‘talks’ are about their behavior and such, so wanting to relax them a little I said I wanted to talk with them about the language they were using. Again, they flashed quick angry looks at one another that screamed, “What did you say that got us into this?” I quickly rebooted and tried again. “I want to talk to you about marriage and having kids.” At last, their faces relaxed and they leaned back into the couch in relief.

That scene began one of our first conversations about using the word IF in relation to them getting married and having children. You see, I want them to say, “If I get married” and “If I have kids.” Its no semantic game to me, I believe we create expectations and assumptions with the words we use. Words have power. What we say matters. What happens when the when fails them later? In regard to infertility I walked that ‘when’ path down a rabbit hole of heartache.

To marry and have children are life choices, not givens (lest we adults forget). Whether they choose to marry, to adopt, or to grow a family biologically; these are choices they will have to make. I refuse to dictate to them (nor will I allow cultural narrative to do so) what road they should choose to walk, but I will give them the power of choice.

I want to raise young strong girls – and yes, even that boy of mine – that use the word IF in terms of marriage and family.  Having my girls understand their choices creates power and opportunity and most of all – Freedom. To know that they always have choice, and to cut their own path, whatever that may be, is invaluable. So, yes, I started this conversation young because I felt that at fifteen it would be too late, their ears will have already been tuned to the beat of a patriarchal drum that dictates neediness over independence. Independence, choice and freedom are words and ideas I want my children to embrace thoughtfully.

Now let’s get down to the questions you really want to ask. Do my girls still play house? Yes. Do the ragamuffin teddy bears still get married and have lots of ragamuffin brown bear duck babies? Yes. And I’m happy about that. Its just that now I smile when I hear them began conversations about boys (because they do happen here) and listen attentively when they talk about their future families. Because what I’m hearing is a whole lot of Ifs.