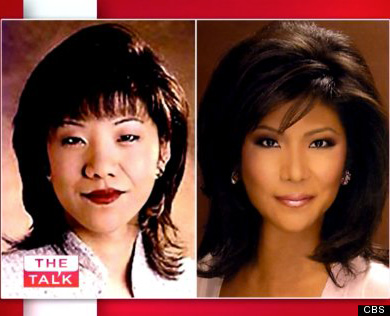 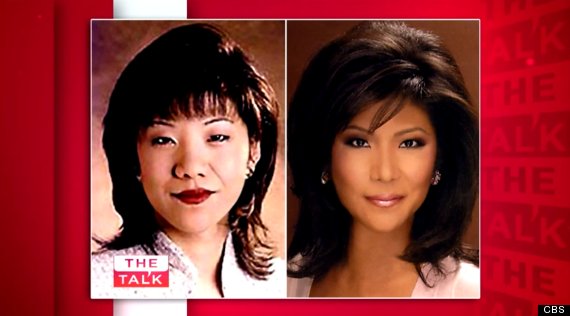 All weekend long my thoughts have been about Julie Chen. Initially last week I wanted to write a knee jerk response to her ‘secret’ revelation that at 25 years of age she had plastic surgery to make her eyes look ‘less Chinese.’ Julie Chen, one of the hosts of ‘The Talk’ spoke plainly and bravely about her decision to complete double eyelid surgery after having conversations with her then boss about how she could never become anchor because of the way she looked. Specifically her eyes. Asian eyes. Does that shock you? Listen to the conversation.

I have read many pieces over the weekend in response to Chen’s revelation. Two camps emerge. The first is the ‘let-her-do-whatever-she-wants-to-her-face’ plastic surgery is okay camp. There are many that equate her eyelid surgery with a boob job – a ‘look your best’ as a TV personality – meaning plastic surgery is often a requirement for those that want to get ahead in television. From those in this camp I felt the communal shoulder shrug and ‘so what?’ Many cite the fact that she made her money and she should be allowed to do whatever she wants. I’m not in this camp – I’m firmly in the other camp. I’m among those that consider – I believe along with Julie Chen – that the culture that moved her toward completing double eyelid surgery is inherently racist. Making this conversation simply about plastic surgery ignores the why behind her decision to alter her face. To speak bluntly, she encountered racism, and yes, she gave in to ‘the man’. I believe her decision was racially motivated. This is not the first time I have encountered the eyelid controversy in the Asian community, and I feel this topic in a very specific way as a mother of a multiracial child who is part Korean.

A few years back I overheard a conversation between my daughter, who is part Korean, and a couple of her Korean friends. It went loosely something like this:

“But you – you are so lucky! Look at your eyes!” One girl said to my daughter.

“Oh. Yeah. My mom says I have mocha-chocolate eyes. Thanks.”

“No. Not the color. The shape. You have double lids. I don’t.” The girl said sadly.

And then the ‘me neithers’ from the other two girls.

“What do you mean?” Said my daughter.

“We don’t have double lids. I want them though. Your eyes are much prettier than ours. They are better.” She said.

And then the other girls were quick to affirm that twisted truth. What twisted truth was that? That double lided eyes are prettier because they are more ‘white.’ There is a long history of this surgery being done especially in Korea and Koreans are articulate about why they want the change – to appear more Western.

Now let me be clear. These friends of my daughters were the same girls who when it was sunny outside ran to stand under a tree saying to my daughter, their friend with Jamaican-Korean heritage – “we don’t want to get dark.” (They only left off the ‘like you’ part – making her unavoidable dark skin less lovely than their light skin.) But, in this conversation, about eyes – well, she was the one who got lucky. This cultural value system dictating what is beautiful and what is to be admired has its deepest roots in white dominant culture. Without even knowing it these young girls are part of a historical system of injustice. My job as a Blended parent is to help my daughters to affirm first themselves, and then ultimately their friends. I must teach my children to affirm how people look racially, to give a both/and perspective on beauty instead of an either/or.

Now, back to the plastic surgery camp. To me it is ridiculous to equate altering your bra size with altering your racial appearance. Boob size has more to do with sexism while making your eyes ‘less Chinese’ has everything to do with racism. Yes, Julie Chen is still Chinese, obviously, with or without the surgery, but she let a white man dictate her self-perception and self-acceptance. I believe in watching the piece you can see the emotional toll this decision has taken on Chen and I don’t think the responses from her co-hosts honored her much at all. If she hadn’t struggled with the racial implications of her choice then she would not have had a long conversation with her parents about denying her heritage by getting the surgery.

Don’t get me wrong, I have much compassion for Chen and while I cannot affirm her choice, I can still see the struggle on her face and hear it in her voice. I found it flabbergasting that the only white woman (yes, Sharon Osbourne), her co-host, even affirmed her choice after seeing the before and after picture of Chen by saying, “It’s the right thing to do.” Osbourne only affirmed the white racist dominant culture that got Chen thinking that her eyes were not acceptable in the first place.

So, kudos to Chen for her honesty about racism in the workplace and how it affected her permanently. Kudos to her family who stood beside her no matter what. But shame on us who still will not face the truth about racism and instead make this conversation about the value of plastic surgery and not how each of us are participating in our culture’s racial system. When we allow ourselves and others to be controlled by racist values of beauty and personhood, we all lose.