Somewhere Between – a film 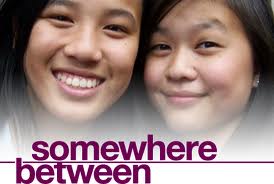 Adoption Mosaic in Portland hosted a free screening of Somewhere Between a few weeks back and I missed it! Never to fear though, faithful friend Netflix brought the film right to my door.

Let me reiterate something I have said before in this space – I watch a lot of adoption themed TV and movies, and only pass along what I think you should not miss. In this vein, I highly recommend watching this movie.

The film itself is a gift from the Director, Linda Goldstein Knowlton, to her Chinese adopted daughter Ruby. In this way the movie becomes a love letter, a resource, and a legacy to her daughter and equally a gift to us as we have the privilege of looking inside the precious experiences of four teenaged Chinese adoptees living in America. Knowlton followed Haley, Jenna, Ann, and Fang as they processed through issues of identity, conversations around race, and feelings of abandonment. For either international or domestic adoptive parents these girls are prophets of what is to come in our children’s lives. Yes, they deal with specific issues related to being from China and that country’s adoption system, but their experiences are relatable to all adoptees and any parent who has a child processing bigger questions of identity.

However, Somewhere Between was perhaps most poignant to me on three levels. The first was the value of language. I have long held the belief – not always popular among other adoptive parents – that the adoptive family should learn to speak and communicate the birth language of their adoptive child, not the other way around. Language is a cultural tie, an emotional link to the country or culture that our children were birthed from. I find it difficult, if not painful, to watch children struggle with leaving their birth country or place AND then having no way to communicate with their new family, thereby increasing the internal dissonance and separation they feel so acutely. I believe the responsibility in preparing to communicate with our adopted children lies solely with us – the adoptive family – and not with the child. This sentiment is conveyed by one of the teens whose adoptive mother became proficient at her daughter’s language before traveling to bring her home. The gift of birth language is a powerful thing. May we as adoptive parents let them maintain one of those first gifts.

The second theme that resonated with me from beginning to end is that every adoptee journey is different. Acknowledging this truth brings freedom for an adoptee to travel their own course. Each girl in the film feels, thinks and processes their adoption and adoptive family differently; uniquely. I know this to be true among my adopted adult friends. One of my friends reunited with her birthparents and feels a sense of peace. Another, has no desire to seek her birthparents and is also at peace. And yet another has met her birthparents and still experiences dissonance and feelings of abandonment. What Somewhere Between shows so poignantly with each girl’s story, is that each is on their own journey. They allow one another to feel what they feel. As an adoptive mother this was instructive. My daughter is on her own journey – her own. Not to be compared to how others have walked their own path.

And finally, the film captures the emotions surrounding feelings of abandonment. Perhaps the most beautiful thing in the movie besides Haley’s birthfather’s deep love and longing for his daughter (it literally brought me to my knees), was the letter Jenna wrote and then read about her feelings associated with ‘abandonment’. It was instructive for my soul. You may even find yourself rewinding to hear her words again and again as I did. These girls have so very much to teach us. As adoptive parents, we often deal with abandonment issues related to adoption. In this film these four brave girls explore the meaning and feelings of abandonment for them personally with sheer guts. Yet again, each girl relates to this issue uniquely from her own perspective and thereby we see four different responses.

Does this film wrap up all the issues in a decisive little script? No. This film captures experiences that will aid us as adoptive parents now and in the future. Hopefully when we deem our children old enough to watch Somewhere Between, it will also aid our children by encouraging them to use their voice and walk their own journey.