Dinners Around the World – March 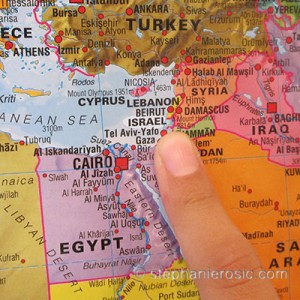 So, I have to ask. How did February go? Did your family enjoy Indian food? Let me tell you about our rocky journey through India. First, I made the Chicken Curry way too hot. Not just your meager, that’s spicy –  way, way too hot. I was sweating. The kids went red in the face. My husband? He put more red chilies on top.

Then, let’s see, can we have an all around cheer for Naan? My children would trade their cookies to get their hands on more Naan. And surprisingly my pickiest middle child liked Indian the most of my three. She enjoyed the flavors and all three of my kids loved talking about India and finding it each night on the globe. So, while not a win-win in terms of eating, overall it was a learning experience.

March brings us to Israel and I personally cannot stop saying Baba-Ganoush over and over again like a broken record – I’m sure it will pass. There are so many wonderful recipes to try, but being from New Jersey we’ve had our fair share of Matzo Ball Soup among other lovely Israeli eats. So I searched for dishes that would be family friendly yet still give us a sense of the Israeli food culture. Here are the top contenders:

Falafel – Generally accepted as having originated in Egypt, this dish is a staple in the Arab world and particularly Israel.

Holishkes or Stuffed Cabbage – A Yiddish word and a dish served during Sukkot.

Corned Beef – Yes, its true. While not Irish, as you’ll see in the seasonings, this Jewish Beef is rendered a lovely salty, fatty delicious mess.

Hummus – An Arabic word for chickpea (garbanzo is the Spanish translation), this widely used spread dates back to ancient Egypt. Serve the spread with fava beans and hard boiled eggs for a true Israeli meal.

Schnitzel – Yes, true again.This dish is a main staple of Jewish culture today brought by Jewish immigrants from Germany and Austria. It is often said that Schnitzel is to Israelis as Hamburgers are to Americans. Who knew?

Kreplach – A dish hailing from the Ashkenazi Jews these dumplings are similar to tortellini or Chinese wontons if fried.

It will be an interesting month with some great food! I hope you are enjoying this as much as my family. And a tip for you – March 17th is St. Patricks Day so you could so easily cook the Israeli recipe for Corned Beef that night and check two things off your list at once!

Missed why we are cooking around the world? We’re helping our families become better global citizens one dinner at a time. Want to catch up? Here are the menus from January and February.