Adopted – a film by Barb Lee 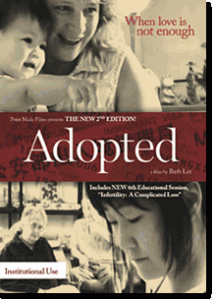 About a year ago I stumbled upon the website for the film Adopted. Sadly, I had not heard of it before and was intrigued by the premise of the movie and the complexities of transracial adoption in Blended families that they sought to explore. Unfortunately though I could not get my hands on a copy of the movie to watch until last month. It was worth the wait.

I think every transracial Blended parent should see this film. Fair warning though, it is raw, emotional and difficult to watch. Two families are closely followed, one with a grown Korean adoptee, and another with an infant Chinese adoptee. They are from different ‘eras’ of adoption, and yet the issues are the same as these girls join white families and separate from birth country, birth culture, and birth language. I caught myself, through tears, on the edge of my chair, watching to see if the more recent adoptive family would understand the issues of their daughter more, would address her grief and separation on a deeper level, would seek to keep ethnic and cultural ties. The lessons for adoptive parents about race, identity and family abound.

Perhaps the most poignant lesson for me was when Jen, an adult Korean adoptee trying to talk with her family for the first time about her adoption and ethnicity, explained why she needed so much verbal affirmation from her family. She pointed out that physically – specifically visually – for the rest of her family including a white non-adopted brother, they only needed to look at one another to sense that they belonged. But for her, she lacked that visual affirmation of physical belonging because she looked different from her adoptive family – thus her deep need for verbal affirmation of love and belonging.

Personally I can look back and see this at work in my Blended family. Even though we openly talk about my daughter’s adoption, value her ethnic identity, and seek to honor her birthmother, she needs more verbal affirmation about belonging and value than her non-adopted siblings. Now I see that that must happen for her to acheive a greater sense of familial belonging. She can’t look into my blue eyes and see a reflection of her big beautiful brown eyes. She can’t look at her sister’s freckles and find a similar pattern on her own skin. She can’t look at her feet and see a mirroring structure in my husband’s flat feet. She can’t look from sister to brother and find physical affirmation of belonging – we must replace it verbally – and that’s healthy and value bringing.

I encourage you to watch Adopted with open eyes and an open mind. Gather your adoption support group and watch it together or sponsor a night for interested adoptive parents at an adoption agency. You may even find a copy at your local library as I did. Once you’ve seen the documentary, leave me a comment or email me your poignant lesson from the movie. I would love to hear how you were affected by the lives of these two brave adoptees.

To go directly to the Adopted movie page click here.