Interview with Sundee T. Frazier and a Giveaway! 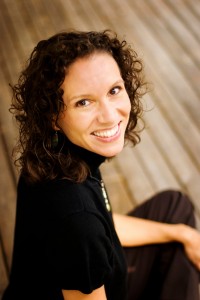 Last week I reviewed Sundee T. Frazier’s The Other Half of My Heart which you can read here. This week I connected with her and she graciously agreed to an interview.  She answered questions about being multiracial in America, the impact of that personal identity on what she writes, and the origins of her multiracial characters. I should mention that you can find her other books, including her most recent children’s novel , listed on her website here. Perhaps most exciting is that Sundee sent me a signed copy of The Other Half of My Heart and I’m giving it away to a lucky reader! Just leave a comment below by January 24th and one winner will be drawn at random to receive Frazier’s The Other Half of My Heart! Now, onto the interview…

What made you decide to write about multiculturalism, and to write for children?

My husband and I were newly married, on a plane to somewhere, and he turned and asked, “If you could do anything, without regard to money, what would it be?” I replied immediately: “Be a children’s writer.” And that’s when I knew I had to do it. I find it a great honor to write for young people.

As for the subject matter I’ve chosen, it’s all come out of my personal experience. My African-American heritage is very important to me and I believe a part of my calling is to keep the history and contributions of Black people alive through the stories I write. But I also see the world through the eyes of a black-white, mixed-race person. I suppose I am multicultural by birth. As author Paule Marshall once said, “Once you see yourself truthfully depicted, you have a sense of your right to be in the world.” Another part of my calling is to let mixed-race kids or kids who are multicultural by birth or adoption or experience know that they have a right to be in the world, too.

What inspires your children’s books?

In the case of Brendan Buckley, it started with a family story and the question, “What if my white grandparents had not changed their minds about my parents’ interracial marriage and I had grown up not knowing them?” That’s how the idea of a biracial kid who doesn’t know his white grandpa and wants to know why came about.

For The Other Half of My Heart, a news story about mixed-race twins—one who looked more black and the other who looked more white—provided the initial idea for the novel, and it came from my editor, actually. I brought in a lot of my personal experience (including being in pageants as a teen) to develop the main character and plot. Some family history—this time from my black grandmother and her experience of being raised by her fair-skinned grandmother—influenced the story, as well.

Mostly, I aim to be honest with my readers—not to avoid uncomfortable subjects like race, because I know young people are thinking about these things and it serves them to read and talk about them.

What challenges do multiracial people face?

Do multiracial people tend to identify with one race more than another? If so, how do they come to this conclusion?

I think people who assert a multiracial identity are inherently saying they identify with all their races to some extent. It’s important to recognize that peoples’ public and private identities may differ. Someone may announce he is one thing to the world, but internally feel like he is another. He may live a “monoracial” identity in public, but allow his multiethnic ways to show more with his family and close friends.

As for me, I truly identify with both because my experience is very bi-racial. When it comes to racial identity, our country’s paradigm is either/or, but I consider myself both/and. I was raised in a two-parent home where one parent was white and the other black. Both sides of my extended family came together often for family events, so I grew up seeing black and white people eating, laughing and celebrating together. I was exposed to both black and white cultural influences. I feel a stronger pull toward my black heritage and culture – because I’ve always felt very close to my extended black family, and because I am proud of how black people have overcome in our country and constructed a culture in the face of terrible persecution and oppression. Because black people had to work so hard to reconstruct an identity post-slavery, black culture is ironically easier to identify, while white culture, although ubiquitous, is harder to define specifically.

Regardless of whether I can identify the white cultural influences in my life, I know that at the very least I have benefited from white privilege because I have a white parent and because of how I look. This is another fact of my multiracial existence – I know what it feels like to be a minority as well as to be included as a part of the majority. Accepting this truth has helped me accept my biracial self.

What advice would you share with young writers, specifically ones with a multiracial background?

My best advice would probably be what Brendan’s dad says to him at one point in the first book: “Don’t let anyone tell you who you are, or what you can or can’t be.” You have stories that only you can tell; if you don’t tell them, they will never be told, so be brave and write (or draw or record or act or dance) them out. The world (and you) will be better because of it.

A huge thank you to Sundee for her candid answers! Don’t forget to leave a comment to be entered to win The Other Half of My Heart!