When the Mundane Leads to Big Questions 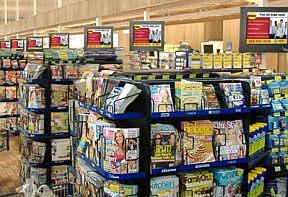 Yesterday the girls and I were at the grocery store. I find the grocery shopping so monotonous and grueling that I always beg my girls for company and miraculously both agreed to come! We chitchatted through the store as the girls spotted things that looked delicious but that we cannot have in our house due to their brother’s allergies. Surprisingly they easily acquiesced to the ‘no’s’ and ‘not in our house.’ We pushed into the checkout aisle and as they began to salivate over the gum and candy I turned around to unload the cart. Above our cart and stretching down the aisle toward the cashier were those trashy magazines – you know the ones you enjoy on vacation but wouldn’t be caught dead reading anywhere else? But the covers that day weren’t about celebrity face lifts or how to lose 10 pounds in 10 minutes, they were all about teen moms and how it had ruined their life. Really.

I have spoken with my daughter about different adoption stories and how each person’s story is different from another adoptee. She has been surprised at this and thought that most were similar to her story or were adopted internationally. In fact, she recently met a friend who is adopted and her story shocked her (they shared with each other, which is why it’s so important for a child to have friends who are also adopted). My daughter came home with many, many questions and found it difficult to digest her friend’s experience. But this – as I see my daughter turning and watch as her eyes scan the bright colorful images of the magazine covers – would be new terrain for us. The idea that having a child can ruin your life – with the words adoption mixed into the language on the front cover – this would be a challenge.

She stood still on the spot and read the words. I could physically feel the questions bubbling up in her as she looked to the next cover which featured a young woman with a baby on her hip talking about regret and sullied expectations for her life. Her eyes flicked back and forth, back and forth, then she looked down and walked to the end of the aisle and waited. No words. She’s pensive and cautious about these things and I know she’s articulating the question she wants to ask and will ask it in due time. Questions that will circle around the idea of adoptees ruining their birthparents lives, of the feeling that she or her friends may have caused their birthparents trauma and that’s why they were placed for adoption. These are intense feeling questions that I know other parents have discussed with their children, but we have not covered that ground yet. So while she processes and formulates, before we have that quiet moment in which we delve into that conversation, I will quietly prepare too and try to avoid what used to be the mundane grocery store.