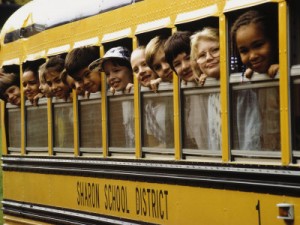 It’s funny what strikes someone as different. For our family as we’ve moved from the east coast to the west coast, the issues of being different are crystal clear. We’ve struggled with the west coast ‘friendliness’, which we interpreted as nosiness before we realized we had lost the ability to chit chat! We’ve struggled with the slower pace of life and are attempting to stop saying to each other and complete strangers, “Hurry up!” Some of my children, and I won’t name names, have Jersey vowel disease, and suffer from sounding like a Soprano in rehab. Our clothes seem to be of a different cultural caliber (much too formal), and the way we see things is clearly different from our neighbors – but we’re learning to adapt, to understand, to ultimately slow down and relax.

In all this I remember also being ‘different’ in New Jersey. We as a multiracial Blended family were different and it was noticed at my daughter’s school. We had found a diverse faith community and neighborhood, but my daughter’s school lacked significant diversity and was a predominantly white public elementary school. I vividly remember the first time she felt the ‘difference’ between herself and her Caucasian friends.

It was supposed to be a happy day – a sun filled field trip in which the first graders crammed themselves onto a bus and spent extra time socializing and making friends. But my daughter felt like she lost hers that day – friends that understood her at least. That day on the bus they took the time to point out all the physical differences they thought were weird or unflattering about her – yes, all in the first grade. Her nose was too flat and wide. Why couldn’t her nose be pointy? Her hair was too black. Why couldn’t her hair be brown or blonde? Her skin was way too dark. Why was she that dark? She faced question after question like this until she came home to me deflated, defeated, and with a new found hatred for her physical heritage.

No amount of me saying how beautiful she was, how she should be grateful for her heritage, or aggressively condemning the girls for their naivete and idiocy would help us at that moment. It was a time for grief, for mourning her first exposure to racism and feeling criticized, not celebrated for the differences among people. In some ways my daughter’s innocence in the world was lost that day and our family doubled, even tripled, our efforts in talking about race and ethnicity and why we should celebrate differences, not alienate one another. Perhaps the thing that most angered me however, and to be honest, still does, was that while we as a family had to work harder at understanding ourselves – and them I might point out – I knew the families of my daughter’s friends were doing no such thing. The other kids had a great time on the field trip enjoying the sun – went home and gave a much, much different report of the day to their parents than the one I received from my daughter.

I relay this story not to condemn necessarily, but as a motivational mandate to help our children with race and ethnicity issues. What we as families do not address at home in helpful, healthy ways, goes unsaid in our children’s worldview. Whether you are a multiracial family, or a monoracial family – it makes no difference. Help your children, for their own sake, in understanding their own heritage and then teach them to celebrate someone else’s, not just their own. That is what I wish had been going on before my child got onto that first grade field trip bus on that sunny day – and then came home so clouded.