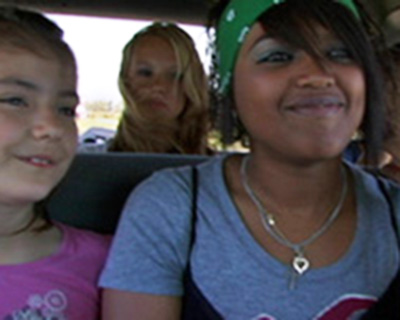 You will find here at Blended many reviews about books, TV, tools, and films for adoptive families. I try to only point to those that have been most helpful to me, or those that have the most universal appeal and are high quality. Currently there are two films, one now in October, and one debuting in November, that meet all of these categories.

I wept my way through Girl, Adopted. Not all over tragic moments, no, but certainly some. Some of my tears though I shed for poignant moments, of superior parenting, and words that extend grace. This film should be required watching for all adoptive parents. It follows Weynsht, a 13 year-old Ethiopian girl from her orphanage to her new home in Arkansas. Her journey is at times painful to watch as she straddles two cultures – Ethiopian and American – and feels she fits into neither. The inundation of White American culture leads her down a path of self-loathing and we watch as she admits to wanting to be white, not black. She processes through transition that is immensely difficult both emotionally and psychologically. Set aside what you think of Arkansas because by the end of the film her dad will amaze you with his ability to empathize, understand, and allow Weynsht to seek out the answers she needs. In the end both Weynsht and her parents have different ideas of adoption than when they first began their journey together.

Philomena is winning awards. It is a true to life film about the 1950-60s era that found unwed pregnant women in Ireland sent to live in convents. Paid well by the government to keep these women and their children, the situation culminated into a manipulating adoption house and a seeming indentured servant disaster. Children separated from mothers for adoption and those mothers unable to pay for their own personal ‘release’ from the convent were made to work for a period of three years in whatever capacity the nuns dictated. This is a film about historical injustice and its emotional damage that unfolds over generations. While there are many laughs that play out between characters in the movie, the painful history is true and biting.

You can read more about the movie Philomena here and also the real Philomena Lee here. See Philomena in theaters starting in November.