My Kids Have A Dream 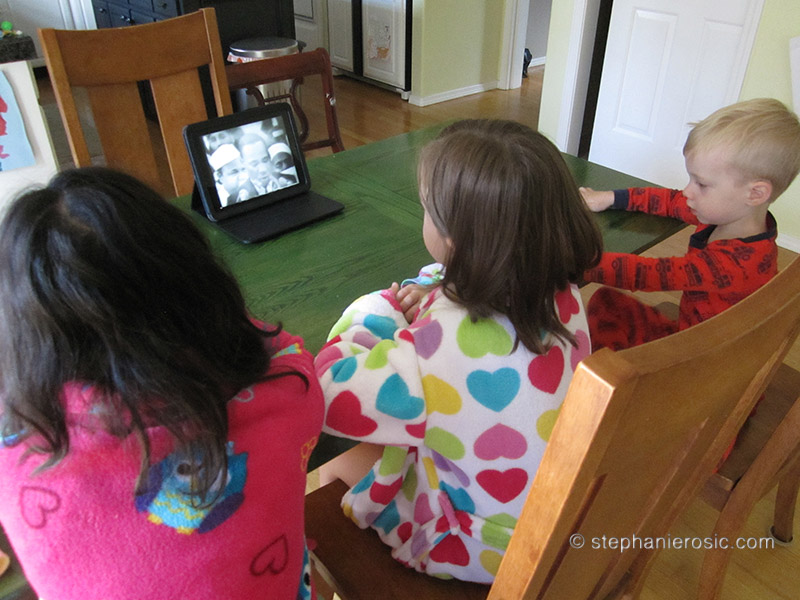 This morning after breakfast I lugged the iPad over to the table and pulled three chairs to one side, all while coaxing three very sleepy eyed kids to watch something important (no its not a cartoon). Just watch this I said (no its not a video of you). Its a speech given by Martin Luther King Jr. 50 years ago today on the mall in Washington D.C. (Yes, its the man from Martin’s Big Words.) Just watch this. (Yes, the whole thing.)

It took a few minutes, but then they were fascinated by the tempo and passion of the speech. My oldest leaned in to look carefully at the crowd that was gathered. “You guys, look. There are black and white people in the crowd.” They asked why the police were there. “How many people came to hear him speak?” They noticed the language. “Mom, he keeps talking about justice.” They took note at how people were listening and responding to his words. “Mom, did everyone else listen this carefully?” They recognized how often words like freedom, nation, justice, and dream were repeated. “He’s a good speaker Mom.”

Graphic of speech by Six Minutes

Afterward they sat quietly. Then we talked about his dream – our dream – the dream for our nation. They recalled the bravery of Ruby Bridges and Rosa Parks and acknowledged their part in bringing the dream into clearer reality. But the majority of our time was spent talking about these words from his speech,

“I have a dream that my four little children will one day live in a nation where they will not be judged by the color of their skin but by the content of their character.”

Specifically we talked about seeing the color of our skin but not making judgments because of the color. Just because someone is a different color than you does not give you the authority or privilege to assume anything about them. You must know a person and who they are to understand another human being.

We talked for quite some time about the school incident at which my oldest daughter was told by another student that she could not participate because she was black. We stopped and re-read Martin’s Big Words and remembered the power of stopping, talking, and praying in the difficult moments when others judge us based upon the color of our skin and NOT the content of our character.

Even sleepy, my kids made simple powerful observations and it made for a timely discussion this morning. It is by Martin Luther King Jr.’s life and legacy that my children are learning these key truths:

Words, not fists – love, not hate.

Want to talk with your kids today about the I Have a Dream Speech but don’t know where to start? I recommend keeping it simple. Sit down and watch the video of the speech with your child. Go with what they observe. Their observations about Martin Luther King Jr., the crowd, and the words he employs should drive your conversation. Talk with them about judging others by their color instead of their character (especially as they go back to school) and lastly, summarize what MLK Jr. means to you. In this way we honor the dream and are striving to live into that dream together.