Five Must Have Back to School Chats – #2 Authority 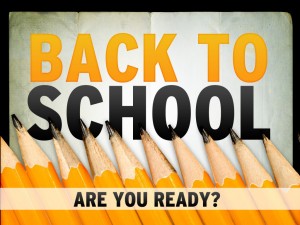 I am 19 days from the first day of school and am ready to have the second of my Must Have Back to School Chats with my kids. Today its about authority. Hopefully I have modeled what good authority looks like at home, but in the classroom and on the playground, there will be many who vie for their attention.

Authority. This is a tricky one. I am a classic Gen Xer  – independent, suspicious of authority, and could care less about titles. I only trust an authority figure once they have proven their leadership ability, not because they have achieved a certain title or level of success. Knowing this about myself, I am still tasked with parenting my children about authority in a healthy way. {Big Sigh.} My children are aware of my “leader suspicion” issue and after meeting someone my oldest often asks me, “Mom, what does your gut say about that person? Would you follow them?” I admit, I like that she asks that question. It shows that she’s thinking about those around her in a thoughtful way. I realize that my issues as a Gen Xer may actually end up serving my children after all. {Bigger sigh.}

When I teach my children about authority it has less to do with obeying authority and more to do with respecting authority. For me, that is a huge difference. We can all agree that not all authority is good; so the more important task is to teach my children to discern authority, good from bad. And it all begins with growing a thoughtful mind that asks good questions of authority figures and the power structures around them. I want my kids to be aware, to consider, to weigh and ultimately to engage respectfully in what is being said around them at school. I want them to think about authority in a critically, helpful way.

Two game changers in the recent past motivate me when speaking to my children about authority as they return to school. The first – Sandy Hook Elementary. I am reminded each morning as I send my children through the door of their school that the teacher who mildly waves to me and then greets my child warmly may be her last line of defense. In the worst of situations I want my child to listen and do everything asked of her in the heat of the moment. A quick thinking teacher could save my child’s life. Following authority at school saved children’s lives at Sandy Hook and I don’t want to forget that.

The second game changer was Trayvon Martin. A lot of conversation at my house has been spent on whether or not Zimmerman had the authority to do what he did. My oldest daughter would often shake her head and say, “Who does he think he is?” And this is the main problem with authority. Those who mistakenly think they ‘have’ authority and then abuse that presumption. This is the authority I must distinguish for my children – to warn them about those who misuse, abuse, and manipulate authority.

These two I hold weightily, one in each palm, as I teach my children about authority. I want to give them the tools to figure out who is using their authority in the right way and who is using it for wrong. Authority is not to be taken lightly I will tell them, by you or by those that wield it. If they sense wrong being done, I want them to be strong enough to stand up, name it and bring it to light. I can look back on my own school life and remember clearly racist and sexist incidences perpetrated at school by those in authority, but I lacked the discernment to do what I teach my children today. I do not want that regret for them.

So while my children will be respectful (always respectful) of authority figures as they walk through the school doors this fall, they will be thinking, and expecting those with authority to act as leaders deserving their respect.