Where Are the Girls?

My girls have a new favorite book. Each is taking a turn reading it, considering, and then just like girls from Jersey, they talk amongst themselves. Grace for President by Kelly DiPucchio is a book about an African-American girl who upon studying the presidential history of the United States simply asks, “Where are the GIRLS?” She later decides to run for office at her elementary school and a heated race ensues. But Grace touches upon a hot topic of conversation in my house. While my girls are daily encouraged by President Obama’s presence in the White House and the historical significance of a multiracial President in office, they themselves have asked the same question that Grace asks in DiPucchio’s book. We can talk all about the women who have run for Presidential office (and there have been many in our history), like Hillary Clinton who they recognize, but they are still left wondering why America has not yet elected a woman to guide the nation? 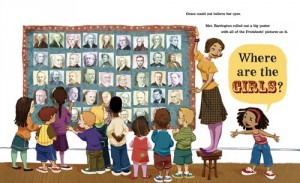 This is a great question and current topic of discussion among my two strong minded young girls. They are encouraged by other women around the world leading their countries. Naturally, my girls looked to see if the countries in their ethnic heritage are led by women. Recently at our house, we have talked about South Korean President-elect Park Geun-hye who will be sworn-in next week. My oldest daughter, who is Jamaican and Korean, is encouraged to see South Korea elect its first ever woman president. She is equally encouraged by Prime Minister Portia Simpson-Miller of Jamaica who just had her first year anniversary in office. But perhaps the woman they are most enthusiastic about of late is the story and life of Fawzia Koofi who is running for the office of President in Afghanistan. Having Afghan friends in school, my girls are interested in the ever evolving life of post-war Afghanistan and what it might mean if the people elect a woman to lead them. They follow her with interest and I was thrilled to see her on the The Daily Show with Jon Stewart a few days ago (zoom to the last segment to see her interview).

At the end of the day my girls are unsatisfied with the answers I give them about why America has not yet elected a woman President. But I am encouraged as I overhear them discuss who might be a good Presidential candidate within the circle of strong women they know and discuss what makes a great leader. They quickly move on to debate what laws they would pass if they had power, and ultimately bicker over which one of them will actually be President and who will only be the Vice President. And it is in these conversations that I find hope – the hope that in their lifetime not only did they see a qualified strong black President, but maybe, just maybe, a qualified strong woman become President too and we can all stop asking that irritating question, “Where are the girls?”