Dinners Around the World – February 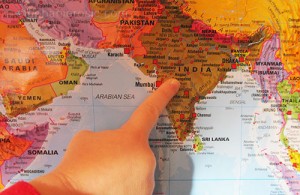 I hope you enjoyed cooking January’s Italian menu! My kids are having so much fun with this global exercise in eating. February brings us to India. This menu was a little more difficult for me to plan because I wanted to choose dinners I thought they would eat because this mama, for one, doesn’t cook second dinners. Planning these menus is a challenge to balance new flavors for their palate but still ensure they don’t boycott a week’s worth of dinners. While my children are adventurous eaters they occasionally do put their gastronome foot down and flat out refuse. With that in mind I have tried to balance the menus for my family and yours. Use your discretion when it comes to new flavors and spices. For example I will most likely halve most spices to create a milder flavor in some of the dishes below. Also, don’t forget to get out a map and keep it at the dinner table!

All of that aside – let’s get talking about and cooking in India! Here is February’s weeklong menu:

Chicken Curry – Although originating in India, according to Wikipedia, “a Curry is largely a Western notion, dating to the 18th century. Such mixtures are commonly thought to have first been prepared by Indian merchants for sale to members of the British Colonial government and army returning to Britain.” (Who knew? Look at what we are learning!)

Chana Saag or Curried Chickpeas and Greens (served with a side of rice and Naan) – This dish comes from the Punjab region of northern-India.

Malai Kofta or Vegetable and Cheese Balls with Sauce (served with Naan)  – This is a classic rich Moghul dish from northwestern India.

Murgh Makhani or Butter Chicken – This is a favorite already in my house hailing from the Punjab region.

Pav Bhaji – From the Marathi cuisine in western India this is a common street food found all over the country.

Tandoori Chicken – Originating in northwestern India that is now Pakistan this is a favorite of my husband’s but can be quite spicy.

Again, as in January, there are six recipes leaving the last day of the week for leftovers and a day off of cooking. I so hope you enjoy exploring a new culture. I would encourage you to ask friends and neighbors who are Indian for family recipes. All of these entrees are available online but I think you would agree with me that nothing beats a recipe handed down from generation to generation. I am fortunate enough to have gathered a few of these recipes from a dear friend of mine and am so looking forward to passing these wonderful recipes down to my children when the time comes.  Enjoy!

Missed why we are cooking around the world? We’re helping our families be better global citizens one dinner at a time. Want to catch up? Here is January’s menu.