What I Would Say to You 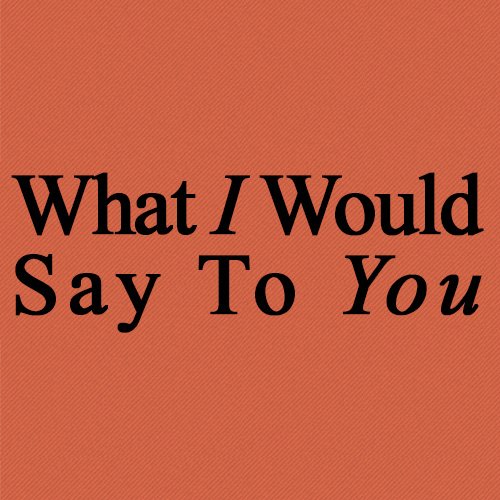 I am an adult Korean adoptee and this is what I would say to you about being transracially adopted. If I just met you, and you asked me where I was from (implying country) I would say “Jersey”.  I used to answer “Korea” but then felt like I needed to go on explaining that I was adopted.  That would usually lead to other inappropriate questions from people I didn’t know but I would always feel obligated to answer.  I would like to tell strangers that it is not nice to demand to know what country someone is from just because a person looks like they may be from a certain ethnic group. Recently I have noticed some changing attitudes about race and ethnicity particularly in the area in which I live, among people my age. There seems to be a greater amount of understanding and sensitivity toward others and the differences that we have between us.  I feel very lucky to live in an area that is diverse, however I still meet people who demand to know where I’m from and then try to guess before I can even get a word out.  I think a lot about my own children and their racial and cultural identities in this area too.  My husband and I have two biological daughters (7 and 9) who are bi-racial.  I feel that I am now responsible to help them learn about a culture that I am still learning about myself.

If you are a young person who was transracially adopted, I would say to you that being adopted is an important part of who you are, but it is not the only thing that makes you who you are.  Find out about your country and culture by going to cultural camps, celebrating special holidays, eating ethnic foods, wearing traditional clothing, and meeting people.  I would encourage you to find something you really enjoy from your birth culture. It is an important piece in discovering yourself.  For me, it was the martial art of Taekwondo.  I feel there is a special connection between the art I practice almost every day and learning something traditional from my country of origin.  My Taekwondo training has taught me to stick with things even when they are difficult. This lesson has served me well as I have had to work through feelings of frustration I felt as a child, that centered around being different and being adopted.  Finding something that you can make your own is really important and will help you form your identity outside of being an adoptee.  Finding your own identity is like cooking;  individually the ingredients might taste OK, but mixed together, they really make something awesome!

If you are a parent or parents of an adopted child, I would like to tell you that you don’t need to try so hard to be perfect parents, be yourselves.  Try not to make the fact that your child is adopted the focus of your family, but make family the focus of your family.  Celebrate your child’s heritage and traditions, but also make your own traditions.  I would also like to tell you that your child is going to go through times when they feel very different from you and from their peers.  This is normal. The truth is that they are different.  It is important for your children to connect with other people that have had similar experiences as their own.

While adoption is not the “norm” for most families, I feel that it is a wonderful way to create or add to a family.  I have had the opportunity to share in one of my closest friend’s adoption experience.  One of the most amazing moments of my life was meeting her and her husband at the airport to welcome them home with their new son. This was particularly meaningful to me because I was too young to remember any of my own experiences coming to my new home in the United States.  It was wonderful to see how much joy that the adoption experience brought to my friend’s family, as it has mine.

This is what I would say to you.