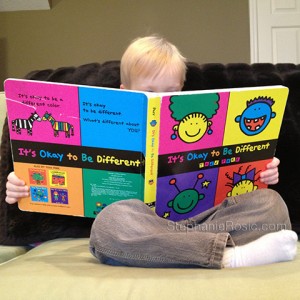 As a mother I miss a lot. Sometimes I’m too tired or too frazzled, or honestly, too grouchy at times to see a great moment in my child. I realized that I pay more attention, am more present when I get one on one time with my children. Attempts to plan said one on one time are often futile as one child’s illness prevents a planned getaway time, or (here is that honesty again) one child’s tantrum prevents an easy getaway with another. These are not unique problems and I’m certain you can relate to my messy motherhood. Because of this I was so happy that I didn’t miss a particularly wonderful moment with my son last week.

The moment occured in the most unlikely of places – the doctor’s office. My son was sick again with pneumonia and was having a breathing treatment in his pediatrician’s office. We were stuck in that end-of-the-hall rarely used limbo waiting room. As with most doctor’s offices there were scattered about on the floor a few sad left behind legos and a stack of finger darkened well worn books to peruse as you wait for what seems like an eternity. My son leaned down and picking up a book, began to ‘read’ to me. He is three and a half so reading simply means processing pictures and making up a story to go along. His tales are riveting adventure stories usually involving three things: cookies, a T-Rex and dare I say poop. This day the story was about a little boy who looked a lot like him with blonde hair and blue eyes, traveling through a set of illustrations from house, to field, to forest, and finally arriving at a playground. He narrated a white-knuckled adventure through the forest involving (not surprisingly) all the cookies you can eat. Turning to the last page he found the little boy playing on the merry-go-round with an African American girl. He read the last page like this, “At the end he was so tired of traveling. He had too much cookies. And so he was so happy when he saw his sister waiting for him at the playground. Hi sister. Hi brother. Let’s go home. The end.” It was a simple thing. It was a little thing. But its his reality projected on a storybook. In the adoption world we might call this a sign of ‘being transracialized’. I just call it beautiful.

You can read about some of our other Blended Moments here and here.

Photo by Stephanie Rosic. Book by our friend Todd Parr.