I have written before about my son’s allergies to preservatives and dyes. It limits his diet considerably and to ensure his safety I make most everything we eat from scratch. However, at a recent party he saw something he couldn’t get past – Doughnuts. There they were in all their round beauty, smelling delicious and begging to be eaten. All the kids at the party sure looked like they were enjoying each and every bite, so it wasn’t a surprise when he turned to me and uttered these words, “Mommy? Can you make me a doughnut?”

I have never made a doughnut. Actually I steer clear of any activities involving vats of oil to fry things in both for the waistline and a large side-serving of fear. But as I stared into those big blue eyes and said yes, making doughnuts became a low-brow culinary adventure! I found a very simple recipe and got started. Here is the recipe for Cake Doughnuts from the trusted Better Homes and Gardens Cookbook circa 1989 (tried and true and easy)!

In a mixing bowl stir together 2 1/4 cups of the flour, the baking powder, cinnamon, salt, and nutmeg. In a a large mixing bowl combine eggs, sugar, and vanilla; beat with an electric mixer till thick. Combine milk and butter. Add flour mixture and milk misture alternately to egg mixture, beating just till blended after each addition. Stir in remaining 1 cup flour. Cover dough; chill about 2 hours.

On a lightly floured surface, roll dough to 1/2-inch thickness. Cut with a floured 2 1/2-inch doughnut cutter. {*Who actually has one of these? I used a glass and a circle cookie cutter to punch the hole in the middle. Improvise people!*} Reroll as necessary.

Fry two or three doughnuts at a time in deep hot fat (375F) about 1 minute on each side or till golden, turning once with a slotted spoon. Drain on paper towels. Repeat with remaining doughnuts and holes. {*Done!*}

While the vat of oil on the stovetop proved a bit frightening (both to hips and hands) I negotiated the putting in and plucking out of the doughnuts with more ease than expected.

I decdied to forgo the icing and just rolled them while still hot in cinnamon and sugar. In the end the smiles and finger licking and cinnamon sugar kisses ensured that I would be making doughnuts again in the near future. 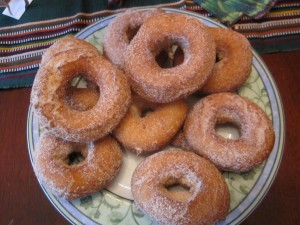