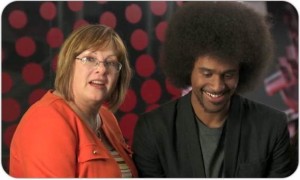 This blog entry is part self confession. I must admit that when American Idol first debuted, I liked it. Well, I more than liked it – I looked forward to watching. But after a season or two the show wore on me and I stopped watching. A few weeks ago I saw a commercial for The Voice and was intrigued, but doubted it was much different than other singing competition shows in the past. However, one night with my husband traveling, and me without sleep, I caught an episode of The Voice and watched Tje Austin perform.

For those of you who missed it, The Voice is a blind audition singing competition. Celebrity judges compete to build a group of singers for their team, but with backs turned. They can only ‘vote’ blind, by ear alone, and once they vote their chair swivels and the singer is revealed. It’s an interesting concept because as we all know, so much is weighted culturally on how we look. Tje Austin was one of the performers that the producers of the show did not show on camera and encouraged the audience to listen blindly first, then judge. Once his performance started, then the audience at home got their first look at Tje. Tje, who is Black Hawaiian, is a soulful singer and two of the judges competed to have him on their team. Cee Lo Green won over Adam Levine.

While all this was good, what caught my ear, and eye, was that Tje is from a multiracial Blended family. His parents adopted him when he was 4 days old. His parents are white and Mormon and his dad looks and talks like a cowboy. Tje himself said that once his family was present the other contestants were “trippin’” to see his family together.  It was a moment in which you saw a Blended family up close and I loved it! But most of all, after the audition, after the hugs and celebration when Tje made it through, Carson Daly, host of The Voice, turned the Austin family toward the camera and proclaimed, “This is the new American family.” Did you catch that? I get excited when Blended families are featured center stage. Let’s keep looking for more great moments like this one!

(Okay – I really started watching because Cee Lo was on this show, and as I wrote this I rocked out to his stuff too. Ah, confessions.)

Photo from nbc.com The Voice